Featured by the Dub Techno blog

The Dub Techno Blog has featured one of my tracks:

I'm pretty pleased as this was my first attempt at producing a dub techno track.

Published by Ade in Me, Music
Tags: dub techno, techno

This mix was recorded in May 2000 in Leeds, on my trusty Technics 1210s. This is 5 years on from the last one posted so the mixing is pretty respectable by this stage.

We start off with some electro tracks from Simulant, Anthony Rother, and UR, then shift into 4-4 techno via Dave Angel's gorgeous remix of Model 500's 'I Wanna Be There'. On the B-side it's more melodic with tracks from (Weatherall side project) Deanne Day and Plaid among others.

Not much access to the 'studio' (insofar as it is one) at the moment so this is just a sketch thrown together on the laptop. Mixed on headphones so it might not work so well on speakers.

I've recently started dabbling with music again in my spare time. This is the first "finished" track with the new setup, that I'm reasonably happy with. Practice makes perfect, so more better stuff is on the way.

You can download a high quality MP3 version here on SoundCloud.

Published by Ade in Me, Music

cappchur is a simple data capture app for tablet and mobile, aimed primarily at the exhibition, trade show and retail markets. The project is a collaboration with Paul Pike.

The app launched this week and is available for iPad, iPhone or iPod Touch for FREE in the App Store, and for Android tablets and phones here on Google Play.

cappchur has been designed to be simple and intuitive without any complicated set up process. Once you've installed the app you can start using it straight away, with no need to register up-front. You can also use it completely offline.

If you or someone you know is running a stall or exhibiting at an event please give our app a try and let us know what you think: cappchur.com.

Published by Ade in Design, Me, Mobile, Tech

The weeks seem to be flying by faster than ever. I keep realising that things that I thought happened about a week ago were actually the best part a month ago. It's May. Where has the year gone?

This I ascribe to the constant background stress caused by the building work on the house. “8-10 weeks”, they said, but this Sunday will mark the end of week 14. Progress has tailed off due to various delays and interdependencies, plus the builders have started on another project. Niggling problems still need fixing.
We're all pretty much fed up now of living on a building site: Huddled together in a couple of rooms upstairs, crammed with furniture and belongings we want to protect from the worst of the dust; Having the odd tired and pointless argument about something we don't actually disagree on; Working till midnight to make up for hours lost coordinating things with tradesmen; Eating out, unhealthily, because we don't have a kitchen to speak of.

Very much looking forward to looking back on these few months. It is going to be a great house. I’m sure it'll feel worth it once we forget how grinding the process was.

Published by Ade in Me
Tags: building work, house

Here's a new track that I have produced. It started out in 2010 as a remix of Another Visitor (sticking with the Impossible Mission theme), but then it sat on a hard drive as an unfinished loop for four years. I finally grabbed a day recently to turn it into a more finished tune. I think this is better than the original; I'm much happier with the production but I definitely need some monitor speakers to get more control over the mixdown.

It was all going so well, last time I wrote one of these. That is, I'd got my life under control enough to find time to write a blog post. It’s a measure of organisational state, a bit like having a tidy desk.

June. I was into a nice routine: Busy, but rarely working late and never at weekends. I'd lost nearly a stone in weight since Christmas, going on two or three runs a week, walking more and eating and drinking less. Not rocket science but it takes a concerted effort to consistently consume less than your appetite wants you to.

After that I got busy again. Time has flown by. My son turned two on July 5th, and my Nana (my Dad’s mother) sadly passed away on August 4th. Bowel cancer. Awful. The funeral, up in Stockport, was two weeks later; hopefully not the last time I'll see my aunt, uncle and cousins although we're rarely in touch.

Somehow it’s nearly November. Most but not all of the weight is back on. My skin is pale and blemished. My desk is a mess.

The trouble with me is that when I get into a big project I become sort of absorbed by it. And being self-employed I don't switch off at 6pm. I somehow need to keep the project’s complex wiring diagram in my head while the work is in progress. So it's always there like a big program hogging most of the memory on a slightly underpowered computer. Everything else still works but it's sluggish. Switching apps is unresponsive.

Everything was fine up till about the end of June but in an effort not to burn bridges with existing clients I've had to double-up, managing and developing on the startup business and fitting other projects around it too. The result: late nights, going in on Saturdays to "catch up" and "rewarding" myself with "well deserved" beer and takeaway food.

This works in the short term when you need to get over a hump, but try to sustain it and it quickly becomes a false economy. A late night of intense work is mirrored by a morning of staring blankly at the laptop, trying to kick start your brain chemistry with coffee. Then not sleeping properly the next night. Being a zombie-like husband.

Anyway, today was good. Literally a long day, as the clocks went back this morning. Did no work except for some satisfying physical work in the garden. Went out with the family. We saw some owls, which made Henry happy as he's been a bit obsessed with them since being introduced to them on YouTube.

Back to work tomorrow. Let’s see if I can wrest control of this thing. Twitter and Facebook off, idiot.

Published by Ade in Me
Tags: personal

Milk is an application suite for schools and colleges designed to be used by students, teachers and parents. It is a student self-management tool. Milk comprises an iOS and Android mobile app for students, as well as the Milk Web Portal which is open to all users.

I was honoured to be invited to join the Milk team at the end of December 2013 and I have been heading up its development since January. Milk is being piloted in a number of schools across the UK this term. It's been a lot of hard work but it's immensely satisfying to see it now coming to fruition.

To find out more about Milk visit our website. 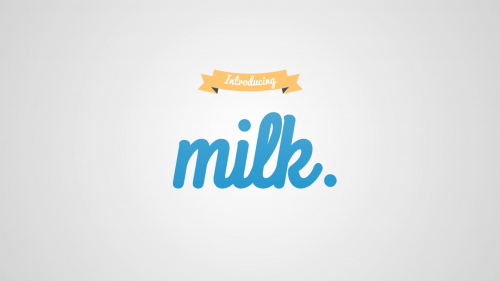