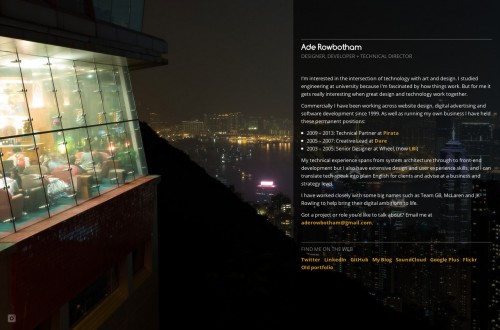 Having left my big important position of responsibility in London I still need to take stock of all the work that I'm proud of from the past few years and put it together as a new portfolio. However, I've been pretty much flat out since the day I left Pirata, and I'm currently juggling three projects among other things, so it's going to be a little while yet. It’s a truism that your own website can be the hardest thing to get round to when paid work is vying for your time.

I bought a new laptop the other day and it has one of those ultra-high-resolution displays. It's a lovely bit of kit but (as is well documented) old software and old websites now look terrible on it, the graphics being either pixellated or blurred as they're scaled up. The newest of my personal sites was created in 2007, and looked particularly outdated on the new laptop so I decided that – at the very least – aderowbotham.com needed a quick and dirty makeover.

The old site was just the front and back of my business card from 2007: 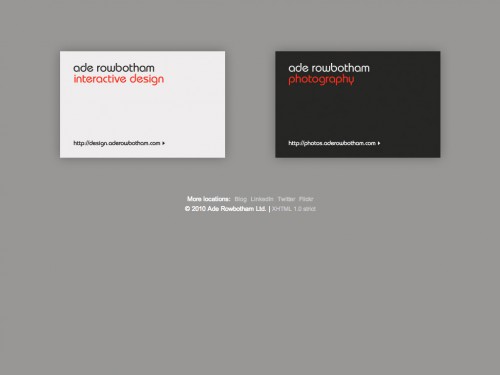 The new site doesn't contain a whole lot more, but here are some of its key features:

Anyway, not much to see really. This post is mostly for myself, Google and of course The NSA. My website is at https://aderowbotham.com.

I wrote some notes on using 'ban' in Varnish 3. Read at GitHub for better legibility.

How Differential Steering Works (1937), and Diesel Engine Governors (1942): Two brilliant videos explaining these triumphs of mechanical engineering, which we today take for granted.

The pneumatic speed governor system is akin to a realtime monitoring and feedback computer program, only constructed with steel and oil instead of digital code - and all the more impressive for it.

Thanks to @jedrichards on Twitter for bringing these to my attention.

Published by Ade in Engineering, Tech

Having spent much of the last few years making sure clients’ websites are fast and responsive, I finally got round to sorting my own blog out. It was letting the side down, being quite sluggish and unoptimised in its shared hosing environment. So I've moved this over to my own server which is running Varnish, nginx and also PHP 5.4 with APC.

WordPress, which this blog runs on, works out of the box in Apache + PHP environments but getting it running in nginx (with PHP-FPM) was a bit of a pain in the arse. This is mostly because .htaccess files are an Apache thing so don't work in nginx. nginx has its own syntax for setting up redirects and there are tools out there for converting between the two but none of the ones I found converted my existing rules successfully.

Frustratingly, following these official instructions to the letter did not work either. Getting the main WordPress installation working was fine but the problem was WP Super cache which relies on some specific rewriting logic. Certain valid post URLs were throwing up 404 errors depending on the state of the cache and what characters were in the address. At that point it had reached 1am so I decided as an interim to put Apache on the server too. I'll return to the nginx configuration sometime soon. I have other sites running off this server through nginx, it's just that WordPress-plugin-specific problem that needs solving.

Running Varnish on the server means it's now easy to route traffic to either Apache or nginx as required based on the request hostname and of course it caches the returned documents so speeds things up even more. Ideally I'd have assets going to a CDN but given that I only get a handful of visitors each day it doesn't really seem worth the effort.

Anyway, that's it for dev-ops news. Hopefully this blog will be a bit more responsive from now on.

Having read several favourable reviews I signed up for a Bitcasa account yesterday. The desktop app for OS X looks good and works well. The user-experience is not entirely dissimilar to Dropbox in that you have a special folder which is then synchronised to their cloud storage. However the the Bitcasa drive is a mounted network drive, so doesn't take up space on your hard disk, whereas the Dropbox folder is local.

"Infinite storage" sounded appealing and they're running a $69.99 offer for a year, so I went for it.

However... I'm now finding it incredibly slow to upload files. Speedtest.net tells me the upload bandwidth of my internet connection is 13Mbps, or ~1.88 MB/s. Bitcasa (mirroring a folder through the app) is just about sustaining 190KB/s which means it's using only around 1/10th of my available bandwidth.

Dropbox by comparison on the same machine and connection manages around 750KB/s, which is about 4 times as fast.

I've tried to get some help from them but at the moment it's like talking to a brick wall. 24 hours on they've still failed to respond to two support tickets I raised, nor have they replied to my nudge on Twitter. And there are at least a couple of threads in their community forum filling up with comments from what sound like extremely dissatisfied customers - such as this one.

I hope it's just teething trouble and they sort this out, but the apparent stony silence from the company doesn't bode well to me. As one forum user commented (here):

"The bottom line is it came out of beta too early and we're paying the price now."

Surely the first and most important thing to do is talk to their new paying customers. When people part with their cash they want service!

Last night I received a reply from Bitcasa on Twitter:

@_ade We're currently working on catching up on support tickets. We'll definitely take a look into your tickets.

Also, they've responded to my ticket and have commented (and apologised) in a number of the forum threads, such as this one:

"We definitely are inundated with tickets, and are working very hard to respond to everyone as quickly as we can, in order to best address everyone's help needs."

It sounds as though they've had a huge influx of users and that's taking its toll on both customer support and the system itself. Plus there are seemingly a few bugs in the software that need ironing out. From their explanations, due to their protocol the data transfer rate is affected by the ping time to the server. They're using Amazon Web Services so are currently restricted to US, Japan and Ireland data centres.

Being in the UK I'm getting a ~30ms ping time to eu1.api.bitcasa.com, which is pretty good, and my Bitcasa upload speed seems to have vastly improved overnight without me having changed anything. I'm now getting around 800KB/sec according to their app, which is not too bad. I hope it stays that way.

I'm sure they will get things sorted out but, as ever, customer support is key. If things are going wrong 24 hours without a response can feel like a long time for a paying customer. Even to acknowledge that there's a problem and to say "we're working on it" goes a long way in these situations.