On the one hand it's just a shadow, the shadow of the moon, so there's nothing magical about it at all (although some would beg to differ). But on the other hand it is, weather permitting, a momentary breakdown of the illusion that we live on a flat Earth with the heavens simply 'above' it. You can get a sense of being in space and of the vastness of things.

It's a shame astronomy doesn't get directly in our faces more often, but then I suppose if solar eclipses were common most people would ignore them the same way they ignore the Milky Way at night.

I'm hoping (obviously) for a break in the clouds. Sadly the world sold out of eclipse glasses before I even thought about it, and I'm not resourceful enough to source some dense lighting gels at short notice. Might have to try the pinhole method (meh) or, yeah, the Intertubes.

Live stream from the ISS

At 05.45 on a weekday morning before work in March 2012, I trudged out into the back garden to look up at the sky. It was before dawn and overcast.

I'd signed up for Spot The Station email alerts some months earlier but had since stopped paying attention to them. Then someone I follow on Twitter mentioned that the ISS was due over Cambridge the following day. I don't live far from Cambridge (not that, given the station's orbital height is 370km, the exact location is important) so I checked the latest NASA email to find the exact time and where in the sky I should be looking.

The information they provide is incredibly detailed. Here are the forthcoming sighting times for where I live:

Given the overcast sky it didn't look promising but in the minute leading up to the specified time the cloud broke up so it seemed like there was a chance of spotting the station intermittently depending on its path.

Something like 20 seconds into the scheduled minute of appearance (just late enough for me to concede that I'd probably got the time wrong), the ISS slipped majestically into view and I stood with my neck craned for the roughly three minutes it took to cross the sky to the far horizon. With the naked eye it's just a point of light but impressive nonetheless. All remaining cloud broke up ahead of it so the entire transition was uninterrupted. And as it passed the zenith I goofily and self-consciously waved up at the crew.

30 minutes later I was driving, as I did at the time, to Peterborough railway station to catch the East Coast service to King's Cross. Radio 4 brought news of renewed clashes in the Gaza Strip. Several teenagers had been killed in an explosion.

Sometimes, usually when tired, I'll slip into an unusually contemplative state of mind where I become fixated on how some remote observer might view our species. This is influenced, among other things I suppose, by Carl Sagan's Pale Blue Dot. It can be a bit overwhelming to consider our collective daily goings-on in the un-blinkered context of our little planet hurtling through the bewildering infinity of space. This is by no means a unique or uncommon train of thought, I'm sure...

But this was one of those moments. Watching that speeding point of light that morning had brought a sense of marvel at what we can achieve when intelligent, inquisitive people work together. Projects like the ISS and the LHC at CERN are for me great symbols of hope. And yet at the same time the great Shakespearean tragedy of human conflict continues to play out. The juxtaposition of the two that morning forced me to pull over for a moment to compose myself.

Disappointingly, last week, amid rising tensions between Russia and the US over Ukraine, Russia threatened to pull the plug on the ISS partnership. 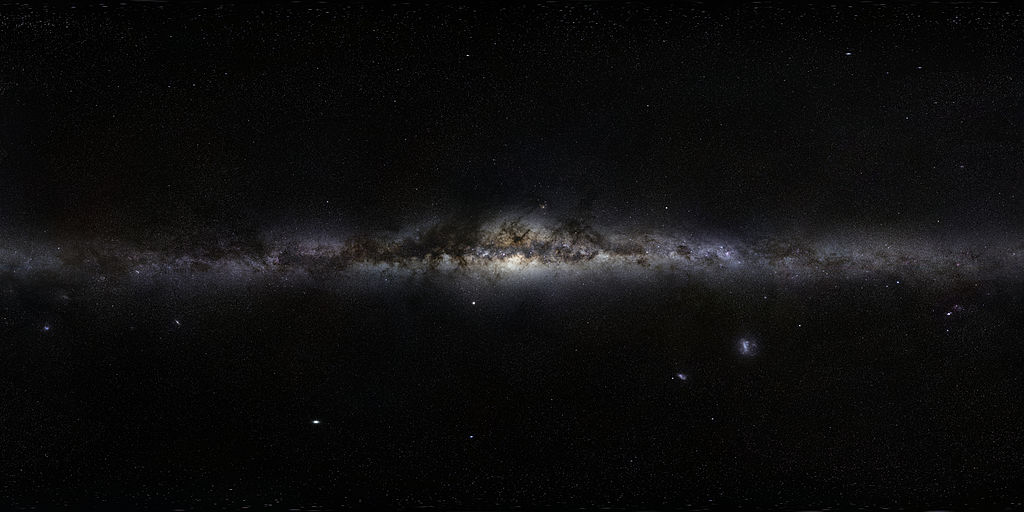 If you're like me, which you're probably not, then you'll enjoy thinking about some of the ridiculously big numbers that crop up in science and particularly in relation to space, which is almost definitely the biggest thing there is.

Thanks to Kepler the estimate of the number of habitable or 'Earth-like' planets in the Milky Way has just been revised up to two billion. While this is unarguably a lot it's worth remembering that our galaxy has a diameter of 31 kiloparsecs or 100,000 light years. Given that light travels 299,792 kilometers every second that is an exceptionally big thing.

Think about how big the galaxy is for a moment, and then recall that the visible universe has an estimated diameter of 93 billion light years and contains at least 100 billion such galaxies...

Someone once said to me that they're 'not really that interested in space', which to me equates to saying that you're not very interested in practically all of everything. Sure, there's plenty of engaging stuff going on down here at our microscopic level, but how could you not want to look up once in a while?

Published by Ade in Space

This excellent panoramic photo of the Milky Way was posted to NASA's Astronomy Picture of the Day site earlier. Click / tap to enlarge: