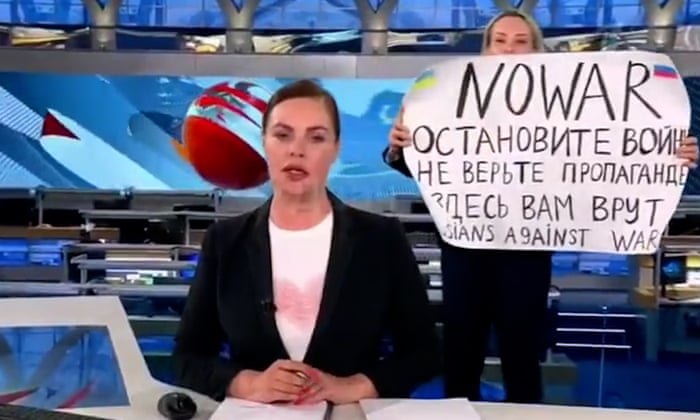 A woman burst onto Russia’s main live evening newscast today with a sign that says: “Stop the war Don’t believe propaganda They’re lying to you” And chanting: “Stop the war! No to war!”

The anti-war protester who crashed the news broadcast is Marina Ovsyannikova, an editor at Channel One, says @pchikov, whose legal defense foundation is going to defend her against charges of “discrediting the Russian armed forces.” She’s already at the police station.

Ovsyannikova also appears to have recorded a video beforehand in which she blames Putin for the war and apologizes for her work on Russian state TV news.

"What's happening in Ukraine is a crime, and Russia is the aggressor. The responsibility for this aggression lies with one man: Vladimir Putin. My father is Ukrainian, my mother is Russian, and they were never enemies. This necklace [shows] Russia must stop this fratricidal war."

"Unfortunately, for the last few years I've been working for Channel One. I've been doing Kremlin propaganda and I'm very ashamed of it – that I let people lie from TV screens and allowed the Russian people to be zombified."

"We didn't say anything in 2014 when it only just began. We didn't protest when the Kremlin poisoned Navalny. We just silently watched this inhuman regime. Now the whole world has turned away from us, and ten generations of our descendants won't wash off this fratricidal war."

To give you an idea of how sweeping the wartime censorship laws are in Russia: Novaya Gazeta, Nobel laureate Dmitry Muratov’s paper, published a picture of Ovsyannikova’s protest that looks like this

Published by Ade in Politics