I'm no great fan of Facebook, though over the past few years my hatred for it has mellowed into more of a grudging acceptance of its presence. I killed my account once and didn't log in for a whole year. During that time one person actually ended up calling me to ask whether I was OK; apparently I'd "dropped off the face of the Earth". I eventually ended up coming back to it for work reasons. We get asked to make Facebook apps, and to do that you need an account.

Things were more fun before Facebook and, working (as I do) in the online marketing industry, briefs are generally far less interesting than they used to be. Almost everything is now a Facebook app of some variety, and everything else at least features "social integration" which is a pseudointellectual way of saying it has Facebook and Twitter share buttons, and maybe a comments panel. And it'll probably prefer (or sometimes only permit) single sign-on with a Facebook account. Basically creativity has by and large gone down the toilet at the behest of the planners whose measure of success is the number of Likes their client gets, which in digital adspeak translates conveniently as "the size of their community".

The worst and most idiotic crime that gets committed to this end is the insertion of what's being termed a "Like Gate": Users are forced to click "Like" on a brand's page before they're permitted to use whatever app it is they went there to use in the first place; hardly a surefire way to build up a strong and loyal fan-base I would say.

None of this is surprising and the blame doesn't lie with any individual (except perhaps for Mark Zuckerberg); it's just the business basics of misguided quick-win marketing, but hell is it bland.

Of Facebook itself, I accept that it does have benefits: Most notably, I can just contact a person without having to know whether they have changed their email address. That feels contemporary, but then I'd like to think that anyone who considers me a friend would drop me a line to let me know their new address whenever they change jobs. And anyone else, I don't really care so much if they drop off my radar.

And in terms of content, if Twitter is my constant source of personally-tuned news, industry chatter, comedy and expertly crafted witticisms, then Facebook is my Daily Mail and ITV. It's low rent material. The follow model is much more interesting than the friend model.

But, oops, none of this is what I set out to write, I'm just ranting.

What I meant to say is that something I find increasingly irritating (and it seems to have stepped up a notch in 2012) is the amount that apps are all-but forcing me to share my every interaction on Facebook. And it's now starting to include largely passive actions. This morning I went to read an article on the Guardian's website and was presented with this:

...and next to it the names and avatars of some of the 62 friends who "use The Guardian".

I understand that these are desperate times for the traditional press, but I don't wish to know whether a friend has merely read an article (for that is one of the Guardian Facebook App's features), it tells me nothing. If they "Like" it then arguably that's more useful, and even better they might post a comment about the article along with a link to the original, but the simple fact that they've read it is just utter noise. Likewise, Spotify wants to actively tell the world whenever I simply listen to some music!

And this is all down, of course, to the great fallacy about social media: That companies are doing it for the benefit of the community, for their users. When I play Bejeweled Blitz on my iPhone, OK it's nice that I can compete against the two of my Facebook contacts who also play the game, but then after every single go, it wants me to share on Facebook the fact that I've had that go. No thanks. 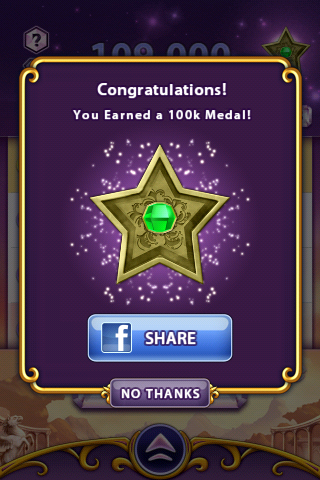 And people are doing it. My Facebook news feed (or whatever it's called at the moment) is strewn with: "Mike read an article on The Guardian", "Luke 'Likes' Volkswagen", "Tom was awarded a 300k medal on Bejeweled Blitz!!!", "Matt listened to [some album] on Spotify". Yes I can opt out of these things by hiding updates from various apps or users, but really I'd rather just not opt in in the first place.

The number of sites and apps using Facebook as the default form of registration and login, and then defaulting to sharing everything that happens within that site on Facebook, and the fact that so many people are simply going along with these schemes, apparently unthinking, is to me nothing short of a slow motion car crash for the Web. The idiots are winning. Facebook, let's not forget, is a proprietary and privately owned platform and the Web was founded on quite opposing principles.

As users the power is in our hands to reject all of this. So, for as long as it remains possible I'll be reading my news anonymously if that's quite alright. And no, I won't be linking my Spotify account to Facebook, though thanks all the same.

Published by Ade in Geek, web

Pete G quite likes this

Yes, I was tarring all Facebook apps with the same rather large brush for effect, and a little unfairly. Of course the idea and execution is what’s really important, though the vast majority of FB apps out there are somewhat unimaginative.

Perhaps the problem is that Facebook makes it much easier and cheaper (hence the quantity of them), and provides an existing social Framework so it’s tempting to think there’s less of a creative blank to fill in – “Like us to Enter the competition! [job done]”.

This has come at an interesting time for me; last week I deleted my Facebook profile. It had become stagnant and I was tired of moderating it for the various groups of friends I have on there, so I decided to check out. We’ll see how I get on without it.

The point about creativity is interesting. I think agencies are probably bound by what their clients and clients’ customers expect – a presence on Facebook. And then we’re bound by what Facebook allows, and all the technical limitations that come with that.

Horses for courses, as always.

2. I’m a big fan of Twitter for the reasons stated above, but also because it’s far less intrusive than Facebook. It isn’t forced upon me everywhere so much that it gets annoying, and applications that use its API tend to do so in ways that genuinely benefit me as a user. This may be a result of the fact that – while it’s certainly gone mainstream in the past two years – it’s still a bit more niche than Facebook, and it’s less of an obvious platform for brands and marketing people. I just hope it can stay that way while staying afloat. I’d love to see Twitter give way to some kind of “OpenTweet” system that’s as open as the web but decentralised. Though I can’t hold in my brain how much of an engineering challenge this would be.

3. RE #1: I may still post the link to Facebook just to be ironic (and of course to promote clickthroughs to my blog)