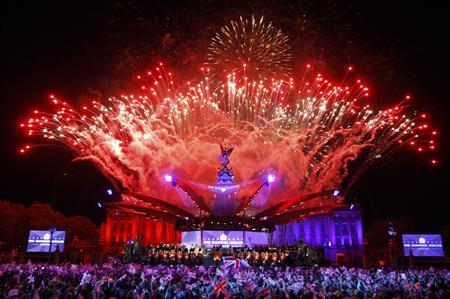 With what could be as little as three weeks until the baby is due Rachael and I spent most of the Jubilee Weekend decorating, trying to get (what will become known as) the nursery, and our study, into a habitable state.

My parents came to help too, and my dad and I carefully measured, mitred and fitted new skirting boards to the baby's room. After weeks of base preparation it's satisfying how finishing touches such as this make such a striking difference to the overall appearance of a room. There's still a few days’ work to do so getting everything finished feels like a bit of a race against time.

It fits the stereotype, I suppose, that as I'm about to become a dad I've also started to take pleasure in DIY. Gardening still fails to light up any neurones, but home improvement I do find most therapeutic.

We just watched the Jubilee concert at Buckingham Palace on BBC1. We didn't plan to, but saw the start and ended up not turning over. And all things considered it was actually quite good, or at least it could have been a lot worse. Robbie Williams is quite plainly a dick so his opening performance was a bad start. And moving on, ubiquitous irksome LEGO man will.i.am's performance with Jessie J was musically bland, though JJ did reveal an impressive live singing voice, to be fair. I'm not really their target audience.

Somehow we didn't turn over; perhaps it was the efficiency with which each performer / celebrity was replaced with the next, or perhaps I'm simply losing my musical taste. Yes, it was mostly predictable: Elton John was repulsive and toad-like, Cliff Richard was old and embarrassing and JLS were a ridiculous boy band, but I suppose there was something for everyone.

Grace Jones didn't fail to deliver on the weird/impressive/terrifying front, Kylie was still on form, and Madness were accompanied by some reasonably impressive projection mapping onto the front of the palace.

Surprises of the night: As much as I was all set up to hate Gary Barlow's Jubilee Song, you know, it was actually OK, and Paul McCartney, whom I actively dislike, managed to pull off a decent finale. Live and Let Die is a catchy tune.

By and large, despite its inherent mainstream predictability there was very little to hate about the Jubilee Concert. And dare I say it, a sense of national occasion is, well, 'nice', once in a while. While I'm not particularly pro-royal, it'll disappoint some of my peers to learn that I'm not particularly anti-royal either. Yes of course there are problems with the principles of hereditary privilege and wealth, but the Royal Family add to the mix of Britain's quirks and I can't see that they do more harm than good. Financially, their slice of the national budget is a drop in the ocean. And hell, the thought of "President Cameron" upsets me far more.

So congratulations to HRH The Queen on 60 years as Monarch. Now let's all get back to living out this miserable time of austerity OK?

Published by Ade in Me
Tags: 2012, Diamond Jubilee, Jubilee, The Queen

It’s the outpouring of genuine affection I don’t quite get, the “bless you ma’am” stuff. It always feels like watching someone cooing over a particularly unprepossessing pet. I nod along, but to me those eyes are as blank and unresponsive as a winter sky.

Absolutely; any cooing I’ll leave to the sky rats. If the royals didn’t exist and someone were to pitch the idea to me today I most likely wouldn’t be in favour at all.